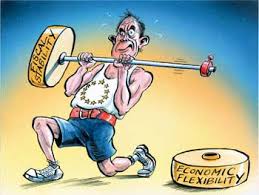 On January 13, the European Commission issued new  guidelines, to the European Parliament, the EU Council, the ECB, the EIB, the Economic and Social Committee and the Committee of the Regions, for “making the best use of the flexibility within the existing rules of the Stability and Growth Pact” (SGP). The report underlines that the existing rules apply with no modifications, and that the guidelines aim at reducing the scope for discretion in their application, a complaint often made by smaller EU members.

The guidelines were much awaited, for political and a technical reasons. From a political point of view, Prime Minister Renzi and President Hollande had much invested into promoting an exchange of “structural reforms” for “less austerity” and into promoting an active role of the EU in fostering  investment and growth (the Juncker plan). Technically, the waves of  revisions and additions to the Stability and Growth pact had raised the complexity of the European rules to a matter for EU exegetes, so that a clarification and simplification was due. In fact the  Communiquè ackowledges that “The Commission now gives Member States additional certainty on how it
will apply the Pact. Equal treatment of all Member States and
predictability of the rules are at the core of the Pact”.

The guidelines cover 3 issues: the structural reform clause, the investment clause and the cyclical conditions.
Structural Reforms
The exchange of structural reforms for less austerity works as follows. Consider a  country implementing (or credibly committing to) a “major” reforms that has positive growth and  budgetary effects. Then there are three cases:

Case 1 is taylor-made for Renzi’s Job act, and gives legitimacy to the Italian deviation from the MTO in exchange for the labor market reform. Case 3 may help France, Spain, Portugal, Ireland, Poland which are under the EDP scrutiny (see Table 1) although it is unclear whether all these contries may qualify for the extra-time (France may not).Notice that this “structural reforms” clause rewards past fiscal discipline by giving countries not in the procedure a better bargain.

Investment
The Communiqué clarifies that countries’ outlays to the new European Fund for Strategic Investment, the vehicle  for the Juncker investment plan, will not be counted for the deficit and debt criterion. Moreover, an “investment clause” specifies some extra-room for investment for countries in recession. A country is allowed to deviate from the adjustment path toward the  MTO,  provided a) the investment has measurable positive effect on growth and public finances, b) the country is not under an EDP ; c) the country is in recession (defined as negative growth or  output below 1.5% of  potential); d) the deviation is temporary, e.g. it is compensated within the time framework agreed in the convergence plan, and does not lead to violation of the 3% deficit limit  d) the investment is co-financed by EU institutions.

The conditions for getting extra-space for investment are quit stringent, and yet the investment clause may be exploited  by a relatively large number of countries. Table 1 and 2 show that countries that satisfy conditions b) and c) include Austria, Belgium, Czech Republic, Denmark, Estonia, Finland, Iceland , Italy, and the Netherlands. Again,  not being part of the EDP club has quite a few privileges.

This part of the document is quite important,  given the widespread criticisms that the current framework fosters procyclical policies and leads to divergence in Europe, see  http://www.voxeu.org/article/time-scrap-stability-and-growth-pact.
Nothing changes for countries in the EDP club, for which the consequences of bad cyclical conditions will be taken into account by focusing on structural balances. For “fiscal responsible countries”, two contingencies will determine the adjustment pace to the  MTO: cyclical conditions and debt sustainability. Here things get rather complicated, however,  since there are no less than 4 variables which pin down the size of the required fiscal adjustment: real GDP growth, the output gap (the percentage deviation of GDP from potential output as a fraction of the latter), the growth rate of potential output, the debt over GDP ratio. The idea is to account both for the state of the economy (the level out the output gap: the adjustment is smaller, the more negative the gap),and  its rate of growth (the adjustment is larger, when GDP grows faster than potential output), together with debt sustainability (more tightening for debt/GDP exceeding 60%). All this is examplified by the “matrix” reported below. The rows describe how far is the economy from potentential output, the columns differentiate low from high debt countries. Growth considerations in each cell determine the size of the  required adjustment.
It turns out that limiting the matrix applicability to countries who comply with the 3% limit, prevents many countries in deep recession (Greece, Portugal, Spain, Ireland, Slovenia) from benefiting from the austerity discount, and leaves  only 2 countries with a zero required adjustment in 2015: Italy and Estonia. Italy is in “exceptionally bad times” (row one, column two), and Estonia is in “bad times”, with “debt below 60% of GDP” and “growth below potential” (row 3, column2). Other “beneficiaries”, with only 0.25 adjustment, are Austria and Slovenia (in “very bad times” with high debt, row 2, column 2) ,  Finland and Netherlands (bad time, growth below potential and high debt,column 3 row 2). Conversely, Slovakia, Poland and Germany get a standard 0.5% adjusment (row 4 , column 1) while countries with high debt and normal times, Belgium, Hungary and the UK should adjust by more than 0.5%.
Conclusions
The new guidelines operate within the existing rules, and therefore share the  limits of the fiscal framework: the 3%-60% taboos, the volatile paraphernalia of potential outputs, output gaps, structural unemployment rates, non-accelerating wage rates, cyclically adjusted balances and so on. However, they have three merits: first, they improve the transparency of the rules; second ,  they establish the principle the fiscal adjustment should not be the same for everyone;third they give incentives for fiscal discipline and structural reforms. On the down side, the exclusion of countries with an excessive deficit procedure implies that the overall impact on the EU economy may be rather limited since these are exactly the countries where cyclical conditions are worse, also as a result of front-loaded consolidation, and where investment and reforms are most needed.
PS: It is also unclear what will happen to the Fiscal compact  rule = adjust annually by  1/5 of deviation of the debt ratio from the reference value of 60% . My guess is that it will be silently scrapped..